Does the proposed NDC commit to support farmers, prevent deforestation, and restore damaged ecosystems? What kinds of programs are proposed? Has the climate impact of public expenditures and subsidies for agriculture been evaluated? How about the consequences of current diet patterns? CLARA members suggest key areas for climate action in land use sectors.

Changing how food is produced and consumed is a key component of addressing the climate crisis. For simplicity’s sake we group production-oriented actions as ‘Agroecology’, while suggesting demand-side opportunities to reduce the climate and biodiversity impacts of national food systems.

But few governments have oriented their agriculture policies to favor agroecological approaches. The NDC process provides opportunities for national agrarian movements to present a coherent menu for change.

A disproportionate amount of agriculture-sector emissions come from industrial livestock (meat and dairy) production. Rich countries must find ways to reduce high per capita consumption of animal-agriculture products – with both health and climate benefits. Export-oriented livestock production is a big cause of deforestation, whether for pasture or to expand croplands for animal feeds – and here too subsidies should be addressed. Use the NDC process (as applicable) to address overconsumption of meat and dairy, synthetic fertilizer use, and reducing deforestation associated with commodity agriculture.

Many NDCs call for ‘climate-smart agriculture’ actions. Unfortunately, this term can cause confusion because of its strong orientation toward genetically modified organisms, increased production without considering access to food, carbon markets and continued dependence on industrial agriculture. Agroecological movements say, ‘Our Land is Worth More Than Carbon!’

Climate Smart Agriculture (CSA) has been promoted by the FAO and the World Bank since 2009, and had three stated aims: 1) to increase the productivity of agricultural crops, 2) to mitigate the contribution of agriculture to GHG emissions and 3) to promote adaptation in agriculture to the effects of climate change.

However, CSA is a vague concept which currently lacks the necessary eligibility criteria to prevent violation of rights such as the right to food. It contains no framework to prevent land grabbing; potential negative impacts of CSA programs on smallholders’ subsistence needs; the problem of indebtedness; or the rights violations that are associated with the privatisation of seed supply.

There is also a fear that the pressure to adopt Climate Smart Agriculture will force developing countries to transform their family farming-based agricultural systems so as to promote agroindustrial models in line with the economic interests of multinational corporations. The development model of industrial agriculture promoted by the multinationals presents a risk to agroecological transitions. 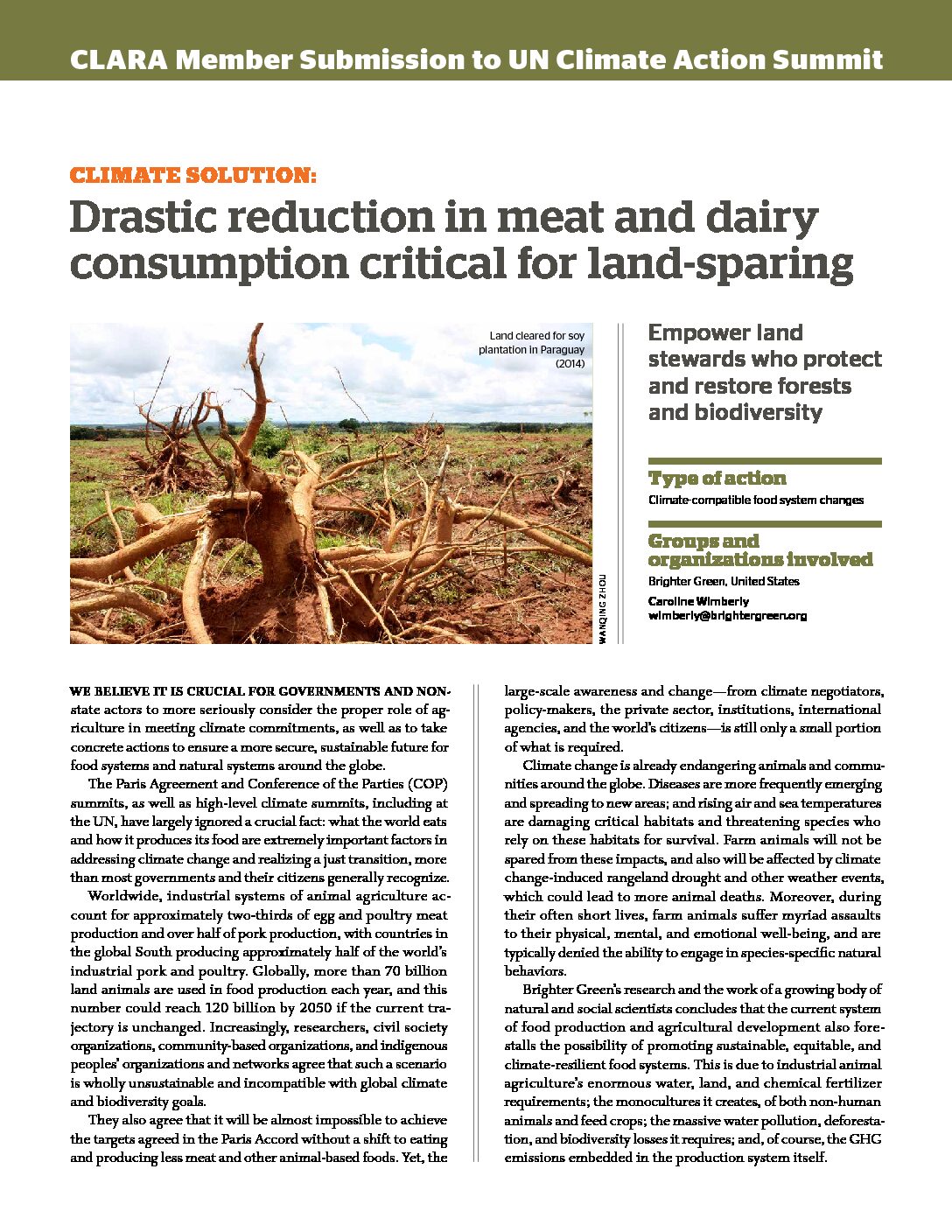 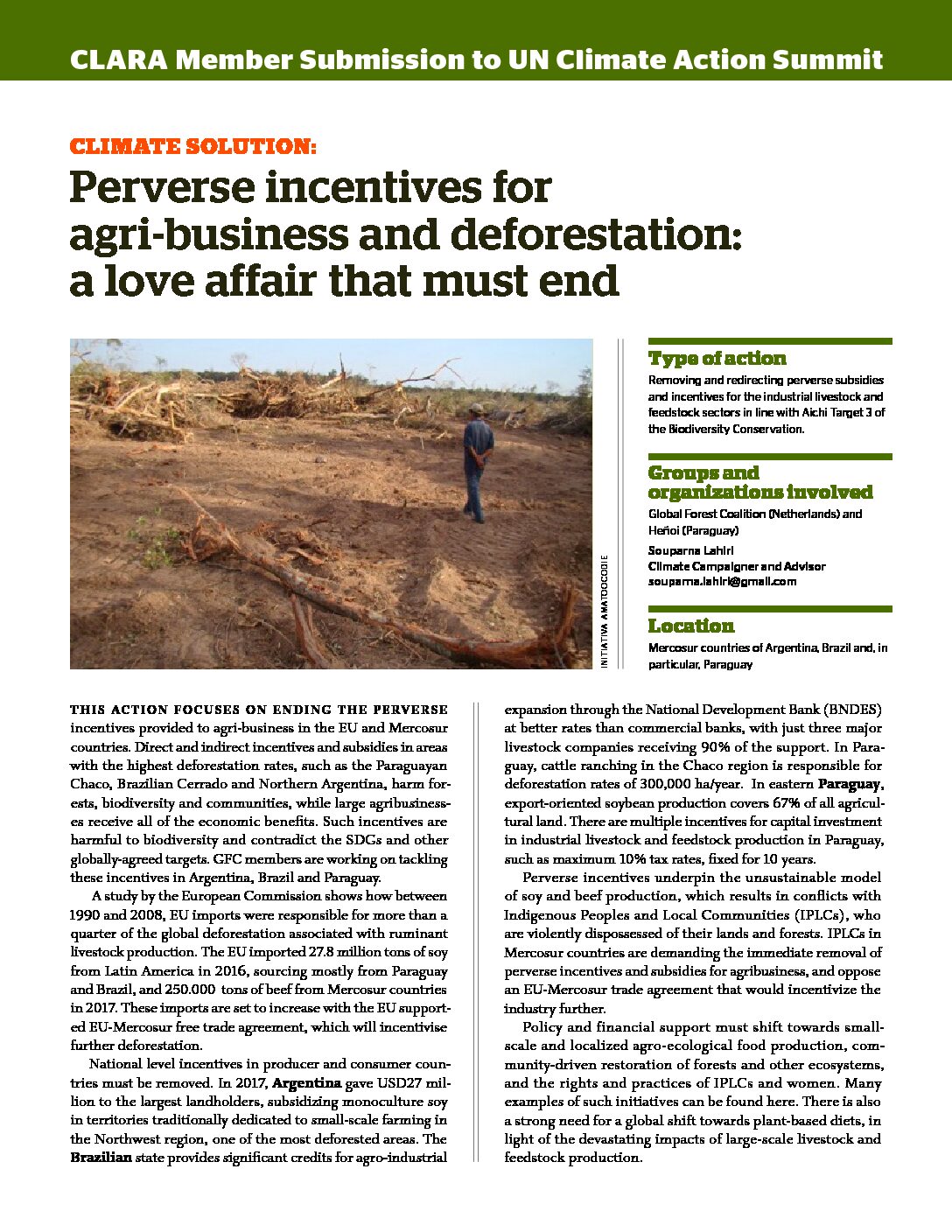 Protecting and restoring forests are among the most important actions that countries can take to reduce climate impacts.

For countries still experiencing deforestation, the inclusion in the NDC of a date certain by which deforestation ends should be seen as a test of its seriousness.

For countries already at ‘zero deforestation’, a next step is analyzing whether national consumption patterns and policies drive deforestation in other parts of the world.

There are several important international initiatives to protect and restore forests.  Two of the most important are the New York Declaration on Forests – which calls for a halt to all deforestation – and the Bonn Challenge, which lays out a global goal to bring 150 million hectares of degraded and deforested landscapes into restoration by 2020 and 350 million hectares by 2030.   Your country may be a member of these initiatives. Make sure these commitments – and plans for achieving them — are also included in the NDC. 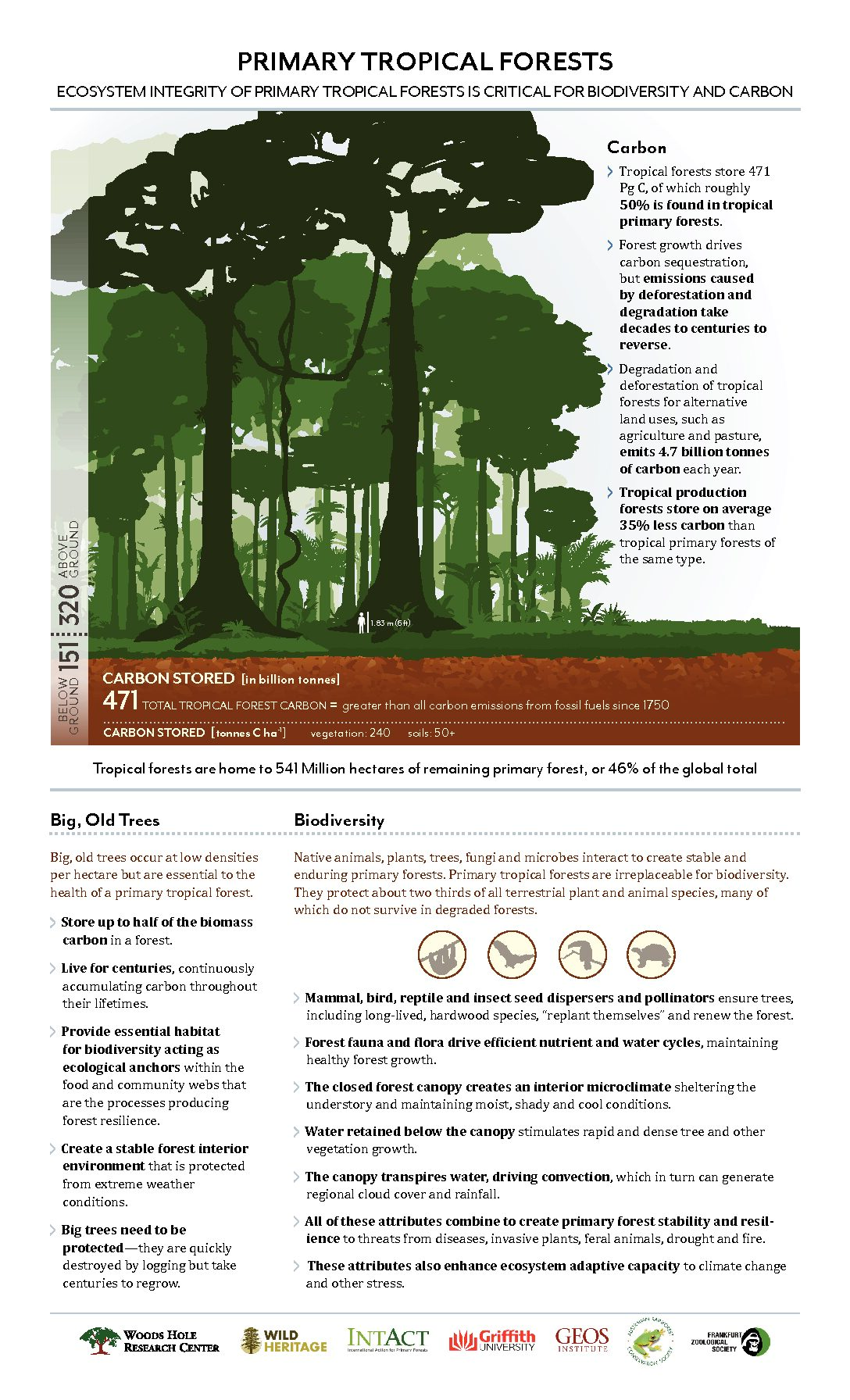 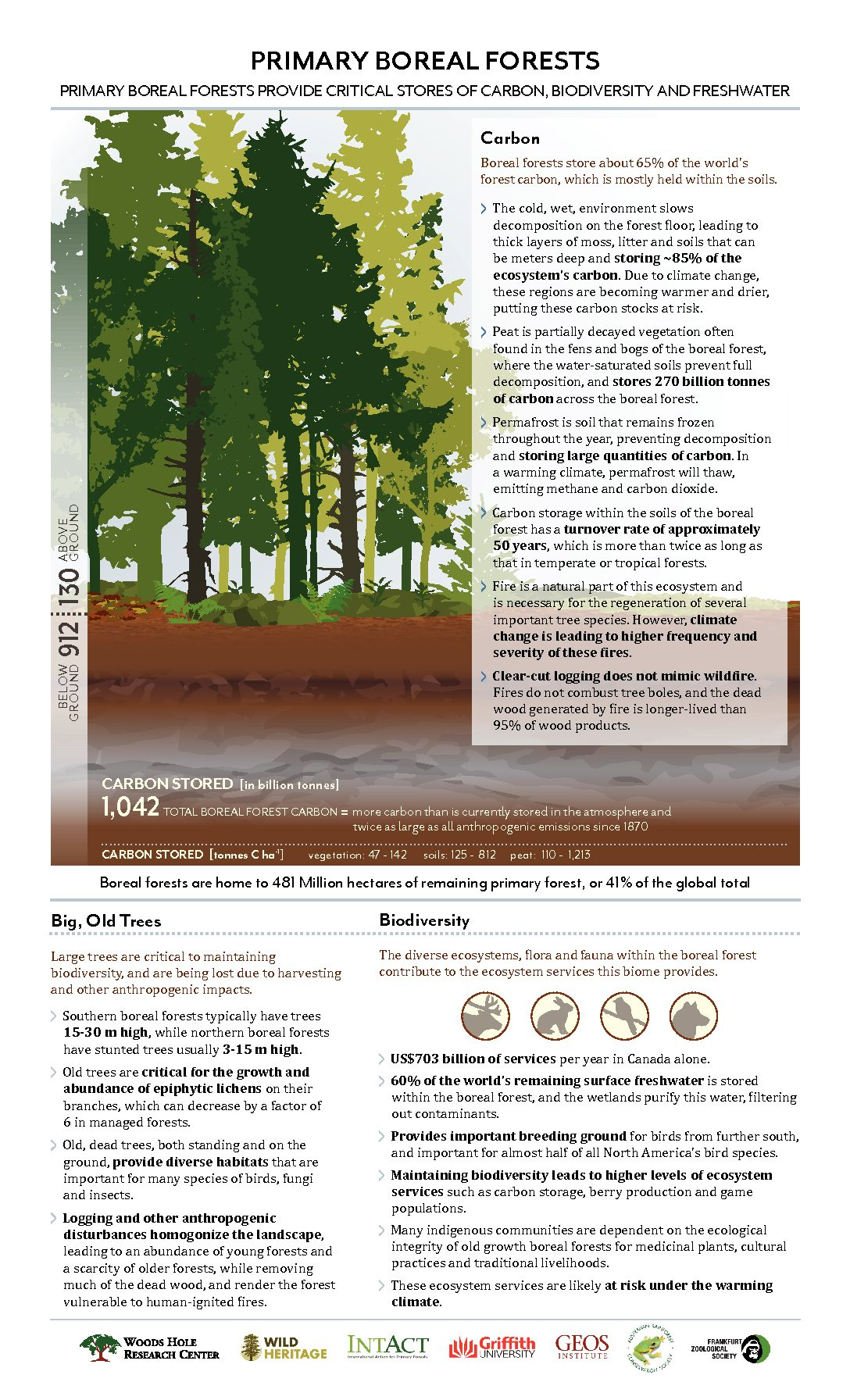 Many NDCs, and national climate plans, will mention ‘nature based solutions’ (NbS) or ‘natural climate solutions’ as an approach to work in the land sector.  The term is contested.  It doesn’t appear in any existing UNFCCC texts, and some Parties have rejected its use because it hasn’t been formally agreed.

Despite this lack of agreement, several efforts have been made to develop standards for  ‘nature based solutions’.   The World Conservation Union, IUCN, has made the most prominent effort to develop technical NbS standards.   Top UNFCCC and corporate leaders have also embraced the concept.  The University of Oxford (U.K.) has launched a Nature Based Solutions Initiative, indicating to policy makers a set of guidelines for NbS.  The term NbS is also championed by WWF.

But big polluters have also embraced the NbS concept: major fossil-fuel companies like Shell and BP and Total now have ‘nature based solutions’ sections on their websites.  Big tech companies are also jumping on to Nature Based Solutions.  These companies see it as a way to achieve ‘net zero’ – to offset ongoing emissions with tree planting and other land-use actions.

Another term in common use is ‘Natural Climate Solutions’.  This term originated with a 2017 scientific paper that analyzed the contribution that land-use could make to climate mitigation by examining different potential practices.   It seems that ‘Natural Climate Solutions’ is more generally favored by the natural-science community, whereas NbS is the preferred term within the United Nations system, and with corporations.

CLARA is concerned that existing definitions and standards for Nature Based Solutions are too weak to prevent ‘greenwashing’.  NbS aren’t ‘rights-based’; and NbS actions, when conceived as carbon offsets, do not lead to net mitigation.  CLARA’s position is that land-sector actions should never be allowed to excuse continued fossil fuel use, or to delay action to reduce emissions.

On the positive side, both ‘Natural Climate Solutions’ and ‘Nature Based Solutions’ have helped to focus on the interconnections between climate change mitigation, adaptation, and biodiversity conservation.  We recommend the report below, written by several CLARA members, which notes that “NbS come in many variations, but protection and strengthening of the ecological integrity of natural ecosystems must lie at their core.” 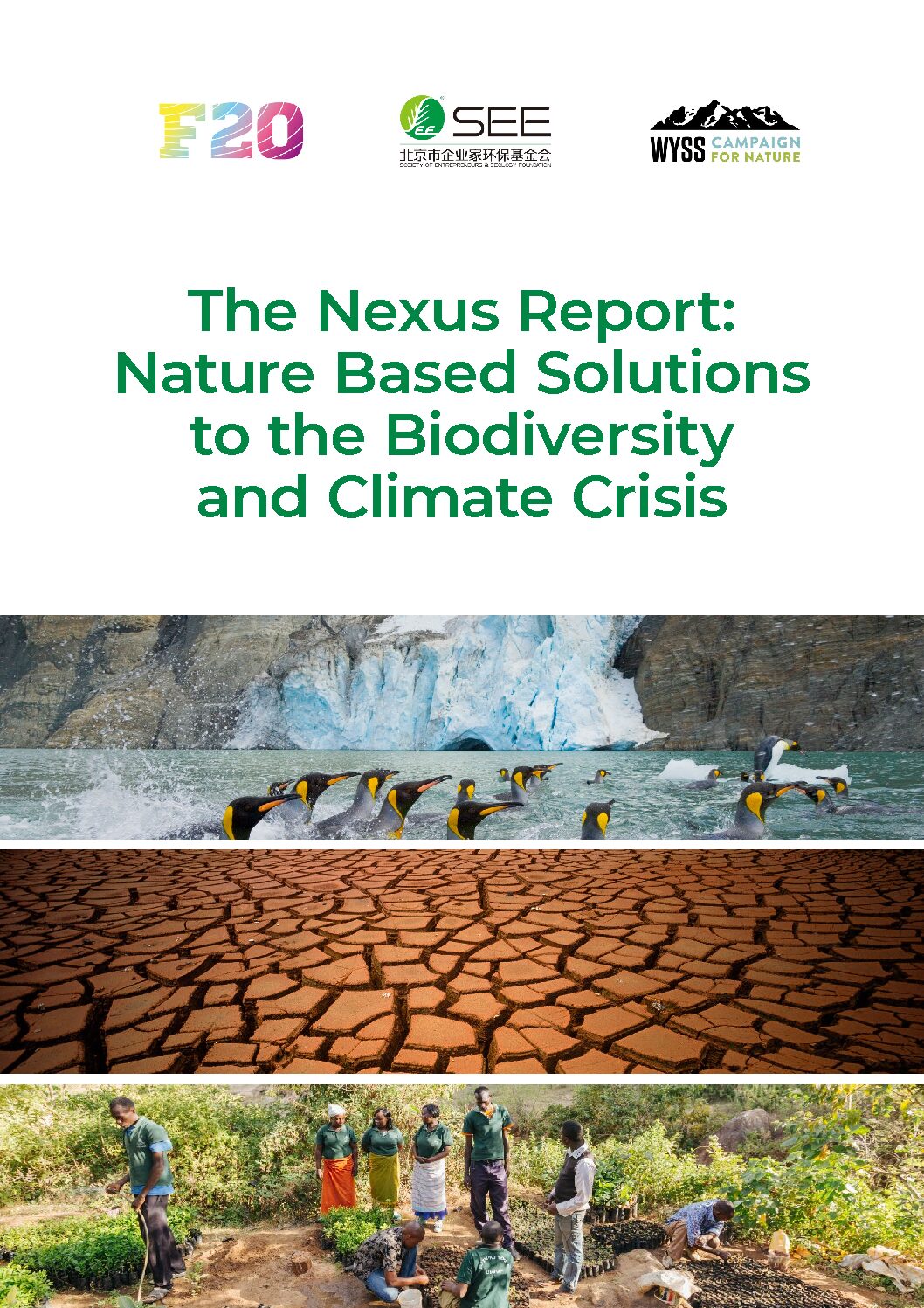 It is important that civil society and indigenous groups look very carefully at what is proposed in your NDC under the heading of ‘Nature Based Solutions’ or ‘Nature Climate Solutions’.  We recommend this academic overview of NbS and an analysis of the limitations of the NbS concept.   See also this critical review of NbS by Third World Network.

Protecting coastal ecosystems like mangroves, salt marshes, and seagrasses is very important for resilience and protection against hurricanes and other extreme weather events. Reconnecting coastal wetlands to the sea also reduces emissions of the powerful greenhouse gas methane.

Peatlands store large amounts of carbon. Although they cover less than three per cent of global land surface, peatlands are estimated to contain twice as much carbon as the world’s forests.  The Global Peatlands Initiative is working to protect and restore peatlands.

Some countries have in place a moratorium on the conversion of peatlands.   Is this cited in the NDC?  Are there other measures in place to protect and restore coastal ecosystems?

In 2019, the Intergovernmental Panel on Climate Change issued a Special Report on Oceans.  The report included a chapter on the implications of Sea Level Rise on coasts and communities.

Chapter 4, IPCC Special Report on the Oceans In a Changing Climate

CLARA members are concerned about the number of NDCs proposing expansion of biomass burning for energy production. Some countries are proposing to convert coal-fired power plants to burn forest biomass. This is not a climate solution – in fact, from a ‘net emissions’ point of view, conversion to biomass almost certainly increases emission of CO2. It is important to review critically any climate action plans that include bioenergy.

An in-depth analysis of the impact of EU biomass rules in one country – Estonia – provides an excellent overview of the issues related to large-scale biomass burning:  Money to Burn

What to Look For

The FAO, along with CLARA member Biovision and other partners, published a study on the role of agroecology in building climate-resilient food systems.