‘Transparency’ has two meanings here. First, governments should be transparent with their citizens about the steps they are taking to combat the climate crisis and prepare a high-ambition NDC, while providing opportunities for citizen input. Second, the Paris Agreement includes a framework on Transparency related to NDC reporting. The framework should make it easier to monitor implementation of the climate actions found in the ‘nationally determined contribution’.

‘Inclusion’ means the right of all stakeholders to participate in decision-making about national, regional, and local actions to address climate change.

To ensure high ambition, governments and civil society should work together to build a mechanism at the national level for ongoing consultations on NDC implementation. The questions below will be useful in designing a consultation mechanism. We also link to a few examples of national ‘good practice’ on transparency and inclusion.

As they established the ground rules for the UN climate change framework in 1992, governments already recognized that “environmental issues are best handled with participation of all concerned citizens, at the relevant level” (Principle 10 of the Rio Declaration). This principle relies on the protection of three interrelated rights: to environmental information, to effective participation in decision-making related to the environment, and access to justice (judicial remedies).

The principle of public participation in climate policies is also enshrined in the UN climate agreements. Through the UN Framework Convention on Climate Change (UNFCCC), governments committed to promote and facilitate public access to information on climate change (UNFCCC, Article 6).

The Paris Agreement deepened this commitment. Governments committed to “enhance climate change education, training, public awareness, public participation and public access to information, recognizing the importance of these steps with respect to enhancing actions under this Agreement” (Article 12).

Two additional human rights instruments are particularly relevant to planning processes impacting land and forests. The UN Declaration on the Rights of Indigenous Peoples was adopted by the UN General Assembly in 2007 and has been endorsed since then by all UN member states. UNDRIP lays out the right to free, prior and informed consent (FPIC). UNDRIP also provides for autonomy or self-government in matters relating to the internal and local affairs of indigenous peoples – critically important for climate adaptation.

Europe and Central Asia (Aarhus Convention) and Latin America and the Caribbean (Escazú Agreement) are regional legal instruments that go further in providing benchmarks for what constitutes “full and effective participation”. 71 countries have either ratified or participated in recent negotiations related to these two instruments.

In decisions adopted by the UNFCCC Conference of the Parties (COP), governments have consistently reiterated this commitment to transparent, inclusive and participatory processes. Transparency is a key element of REDD+, is informed by the Paris Rulebook (see below), and is part of the ongoing negotiations on Article 6 market mechanisms, response measures, loss and damage, and in the broader context of climate finance.

Decisions made under the climate convention require countries to design and implement consultation processes on climate action.  Governments that signed onto the Paris Agreement recognized the importance of promoting the systematic integration of public participation into the NDC, and providing public access to all information about mitigation and adaptation activities to be implemented. Decision 17/CMA.1 “encourages Parties to include, as appropriate, information on how education, training, public awareness, public participation, public access to information, and regional and international cooperation are considered in the preparation and implementation of the actions under the Paris Agreement” (Paragraph 8); and to “collaborate with…regional and local authorities, the scientific community, universities, the private sector, civil society organizations and youth” (Paragraph 10).

The strong legal basis for this commitment – that people have a right to be heard in decisions impacting their lives – is reflected in the Paris Agreement and its reporting processes. The section below, “What To Look For”, shares key steps essential for guaranteeing the full and effective participation of the public in climate decision making.

Monitoring implementation is critical to ensure that commitments are fulfilled and that deficiencies are identified and corrected. Transparency of governments with regards to their progress towards their climate goals is key to strengthening trust amongst nations while being accountable to citizens.

The Paris Agreement deepens the obligation of governments to report on their implementation of climate commitments, and on their progress in reducing emissions of greenhouse gases, through the ‘Transparency Framework’.  This defines how governments are to report their national efforts on reducing emissions, adapting to impacts, and actions related to climate finance. The Paris rulebook adopted in 2018 further elaborates on specific requirements for States — a common set of reporting guidelines for all countries (allowing flexibility for developing and least developed countries).

Under the Transparency Framework in the Paris Agreement, all countries are expected to submit a biennial transparency report. Developed countries must also continue to submit annual greenhouse gases inventories, while developing countries have reporting requirements reflecting national circumstances.  All governments should also document the key features of these public processes, and describe them in the NDCs itself.  This information fosters accountability and the sharing of good practices.

What To Ask For

To provide genuine opportunities for members of the public to participate in decision making, the planning process and implementation of NDCs should include several consecutive steps. 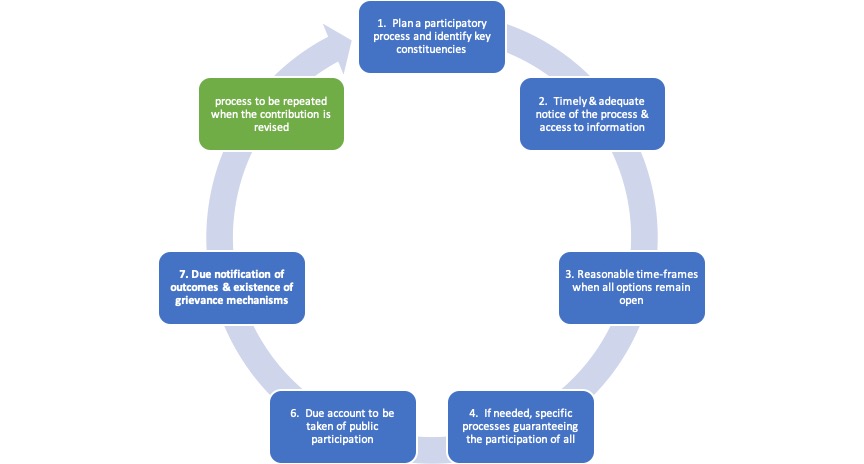 Countries with existing institutions or processes for facilitating effective public participation in environmental policies should use those in planning and implementing the NDC.  Civil society organizations and structures with relevant networks and expertise can provide input most effectively.  Governments should refrain from ‘cherry-picking’ members of the public to participate,  The consultation process should involve existing representative organizations, representing diverse constituencies.

This website includes a variety of tools and links that enable organizations to quickly understand the NDC process and enable effective participation.  See ‘Starting Point’ pages for information on team-building.

As noted above, while references to consultation of diverse stakeholders were included in about half of the NDCs submitted in 2015, only a few of these suggested true commitment to full and effective participation of the public in the context of the NDCs. We have identified below elements of information contained in NDCs submitted so far that could inspire future good practices.

Several governments have explicitly highlighted their commitment to guaranteeing the right of the public to participate in decision-making related to the NDC. In its first NDC, Antigua and Barbuda recognized  “the  importance  of  Principle  10  of  the  Rio  Declaration on  transparency, access and accountability in environmental matters through participation  of all concerned citizens, at the relevant levels, as well as to involve the community by encouraging public awareness and participation by making information readily available.”

In its second NDC submitted in 2020, Norway mentioned the existence of a regulatory act – the Environmental Information Act – as the legal basis providing public participation in decision making processes relevant for the environment and implementing the Aarhus Convention in the country. The country also stressed the existence of consultations between the government and indigenous people (Sami People). In the context of the just transition, Norway mentioned the existence of an extensive system for social protection and institutionalised tripartite dialogue between the government, trade unions / labour organisations, and civil society/religious organizations.

Involvement of indigenous peoples and local communities in forest management

Among the governments referring to forest management in their NDC, a minority stressed the importance of adequate participation and respect of the rights of local communities and indigenous peoples in these policies. Zambia, for example, committed to implement Community Forest Management, Joint Forest Management, and Participatory Forest Management approaches as part of its actions to reduce emissions from deforestation and land management. The government also noted in its NDC that it would seek to strengthen the implementation of its decentralization policy thus resulting in greater empowerment of local communities.

In its first NDC, Costa Rica indicated that it requires full compliance with Cancun’s safeguards on REDD, as well as, securing the indigenous people’s Prior, Free and Informed Consent. The government also indicated its plans to increase citizen forums through the pre-2020 period to define the best climate governance arrangements to deliver on the commitments acquired in this National Contribution.

Participation of women in decision-making

Several NDCs submitted in the first round after Paris stressed the importance of the participation of women in decision-making related to the NDC.  Often this is found in the context of long-term strategy on adaptation:  a commitment to increase the involvement of women and communities in environmental decision-making.

The Marshall Islands’ revised NDC submitted in 2018 contains the more detailed plan provided in any NDC so far regarding the promotion of gender equality through the implementation of the NDC.  In its revised NDC, the Marshall Islands in 2018 stressed the importance of public participation in climate policy making and stresses in particular the need to address gender inequalities in this context. Among the steps identified in the NDC, the government commits to increase representation of women in national and local climate change decision-making and implementation as well as in global decision-making processes and related events.

UNEP:  Guidelines for the Development of National Legislation on Access to Information, Public Participation and Access to Justice in Enviromental Matters